In the April edition of Set in Stone, we’re celebrating Earth Month, and shining a light on those  making the world a cleaner, more sustainable place in 2022. 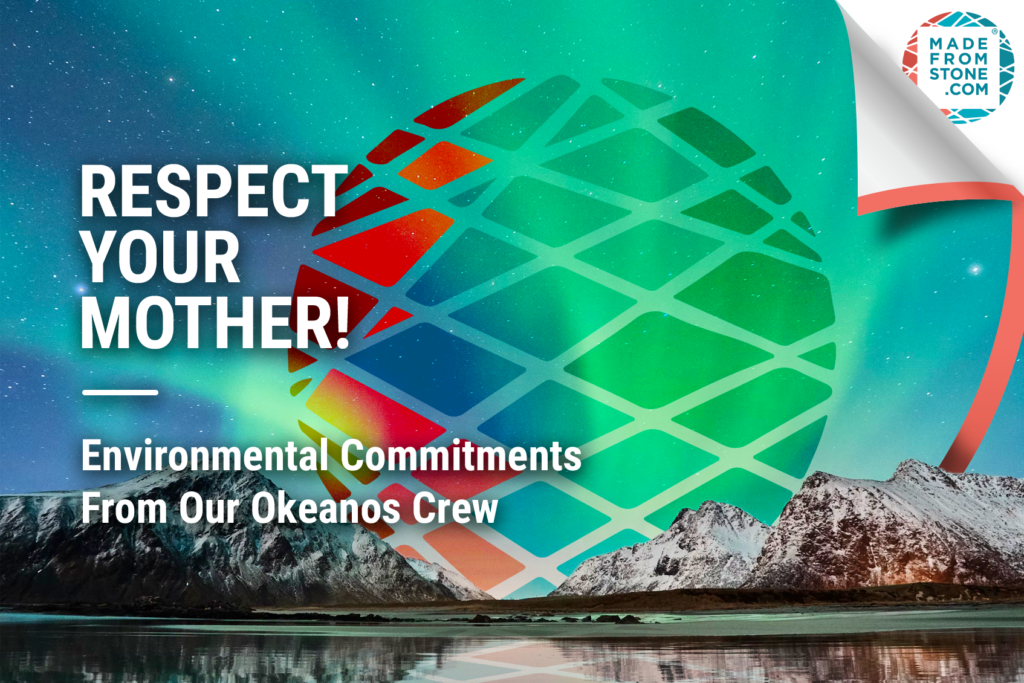 In honor of Earth Day, our team is committed to making small changes in their daily lives that will have big effects on their personal environmental impact. From Cartagena to Cairo, read on to see how these tiny ripples will make waves. 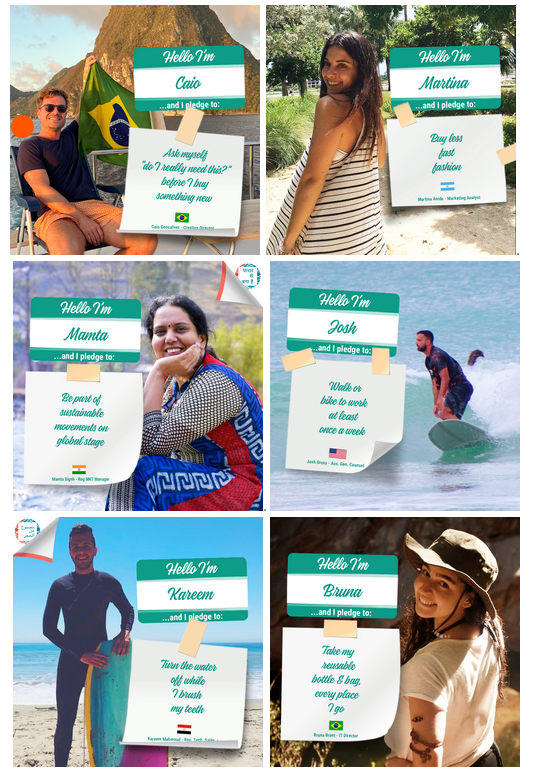 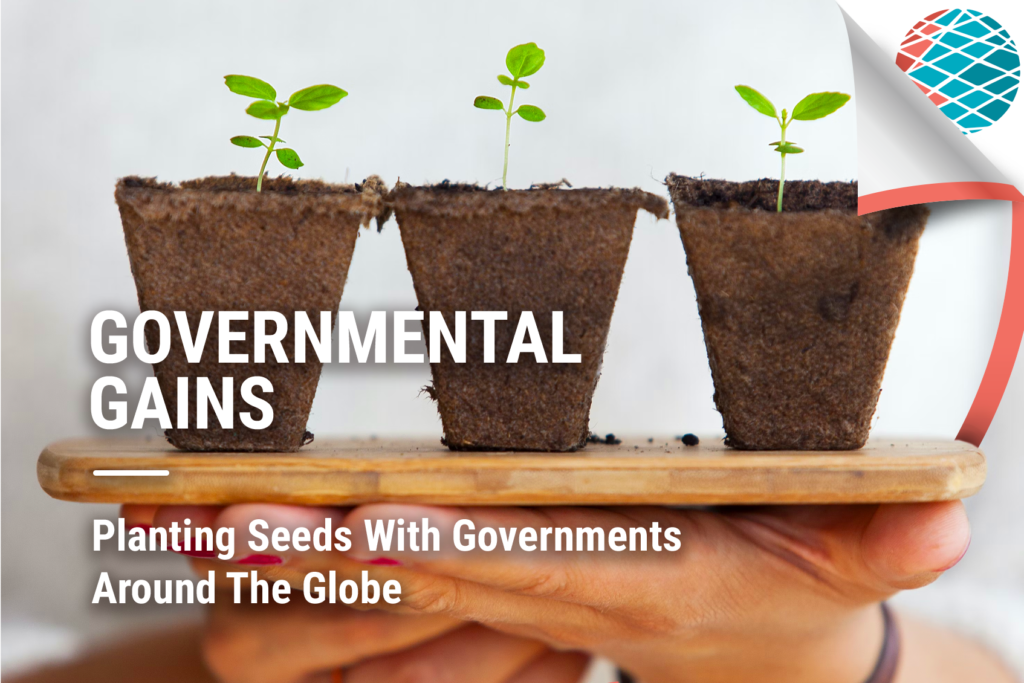 Okeanos understands that legislation plays an enormous role in fostering societal change. Our Government Affairs team has been hard at work in the Middle East, Europe, and in the US! Here’s a sneak peek at what we’re working on:

● EGYPT: will host COP27 this year in Sharm-el Shiekh and Okeanos will be there with the support of the government of Egypt including Prime Minister Mostafa Madbouly, and the Ministry of Environment, as well as the US Government.

● SPAIN: Okeanos has formed a partnership with IMIDA, an agricultural and environmental research center in the Murcia region of Spain. Known as the “huerta de Europa,” or “Europe’s vegetable patch,” Murcia leads the country in agricultural exports and techniques. Under the leadership of Director General Victor Serrano, IMIDA is leading the charge in agricultural innovation in Spain and around the world. Together with IMIDA and the government of Murcia, Okeanos will run tests on our agricultural film technology to learn more about the potential benefits CaCO3 can have on soil and plants.

● UNITED STATES: Okeanos is in discussions with St. Lucie County about use of its products in the County’s oyster reef restoration projects. While several factors (e.g.water quality and coastal zone development) that threaten the oyster reproduction, growth, and survival, across the globe have been known for decades, the threat due to microplastics in the water column is finally starting to be realized. St. Lucie County and Okeanos are acting together to reduce the threat of microplastics in the environment by introducing a plastic-free netting with which to house oyster cultch during oyster reef restoration Free floating oyster larvae will settle on calcium carbonate found in Okeanos’ netting and the shells therein. As these larvae develop into adult oysters, they produce calcium carbonate shells, reduce the dissolved carbon dioxide in the water column, and provide habitat for many species of marine organisms.

To speak with our Global Affairs team about bringing Made From Stone to
a local government, please contact partnerships@madefromstone.com 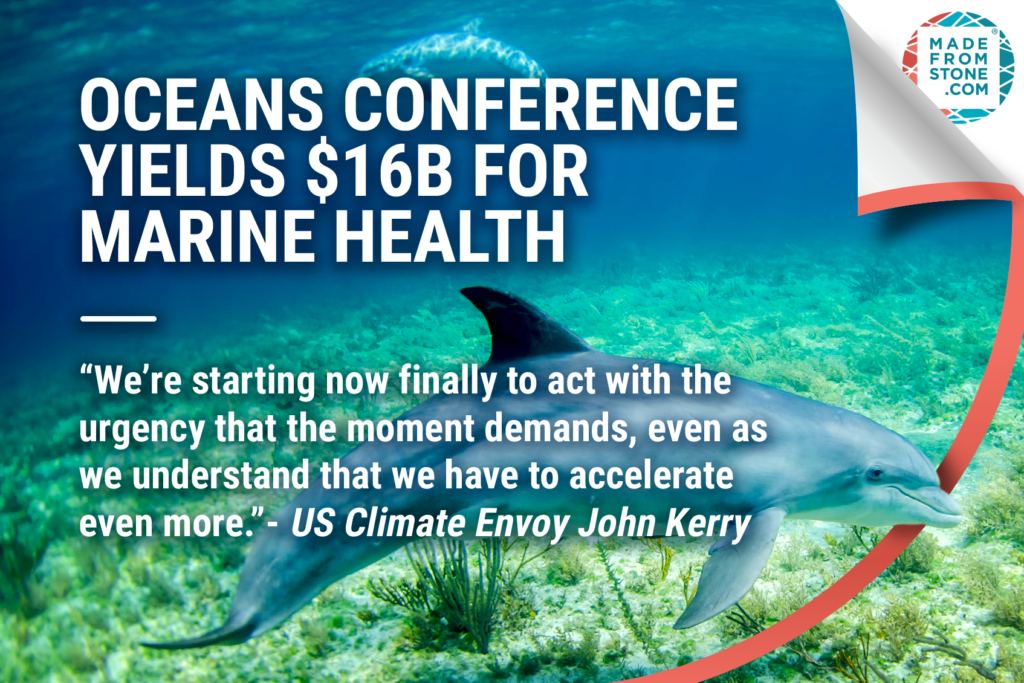 Fifteen islands located in the South Pacific make up the country of Palau, which recently played host to the One Oceans Conference, hosted by US Climate Envoy, John Kerry.

The island setting emphasized the urgency with which global governments need to react in order to protect and preserve our Okeanos, or one ocean, which both coastal and landlocked communities rely on for everything from food to climate control.

While smaller islands are marginal contributors to global emissions, they tend to experience the worst of the climate effects with higher temperatures, stronger typhoons, coral reef loss, rising sea levels and coastal flooding.

Key commitments that came out of the conference included U$16 billion toward improving health, productivity, and protection of the oceans, fisheries legislation, and a new target to protect 30% of the ocean by 2030. World leaders left the conference optimistic about the future and bolstered by the successes. “We should not be paralyzed by the magnitude of this problem,” encouraged Palau President Surangel Whipps Jr.

Now, world leaders and environmentalists alike look ahead to the forthcoming UN Ocean Conference in Lisbon, Portugal at the end of June where more is expected to be accomplished. We’ll be there right alongside them tracking all the action. 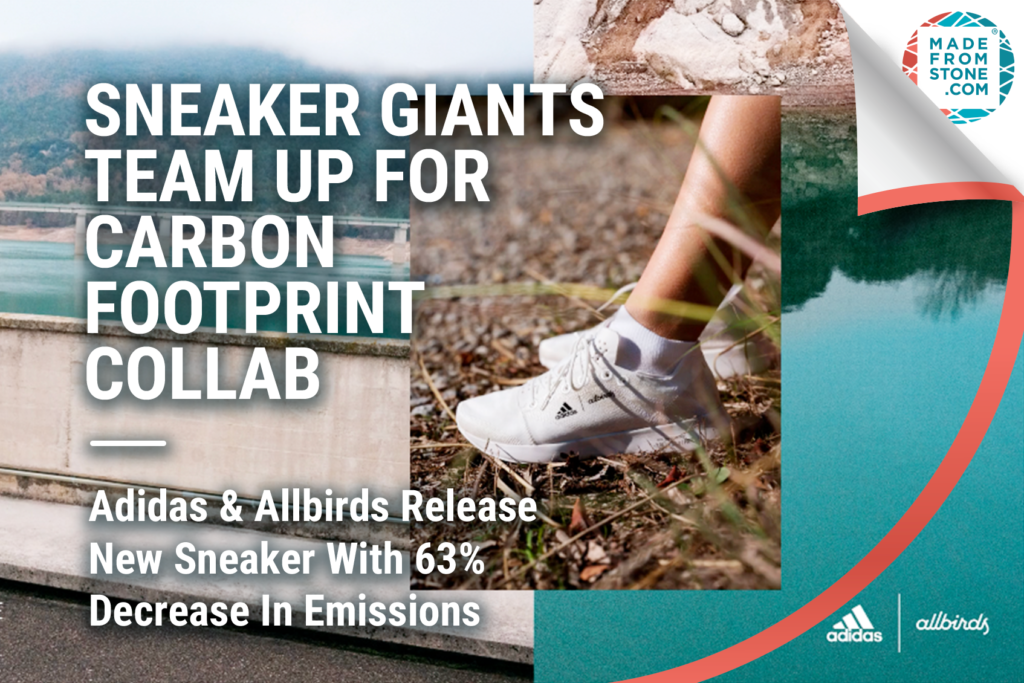 Two titans of the sneaker industry, Adidas and Allbirds, have teamed up to release the ADIZERO X ALLBIRDS 2.94 KG CO2E sneaker.

This stylish shoe, made of a myriad of sustainable materials including plant-based sugarcane, bio-based sugarcane, recycled rubber, recycled polyester, and natural lyocell, boasts a 63% reduction in carbon emissions, with each shoe having an individual carbon footprint of 2.94 kg CO2e – a stat that is proudly printed on the side of each sneaker for customers to see.

Here at Okeanos, we appreciate brands that get their customers involved in the sustainability process, and those who understand that achieving net zero is a marathon and not a sprint. Adidas and Allbirds should be proud of a majority reduction in their product’s carbon emissions – just as we at Okeanos are proud of a majority reduction of emissions in products Made From Stone!  Did you know that all packaging Made From Stone boasts a QR code that allows customers to see the journey their product took from the ground to the grocery before landing in their hands?

Please click here to receive a sample comparative LCA analysis when replacing your
existing packaging materials for Made From Stone. 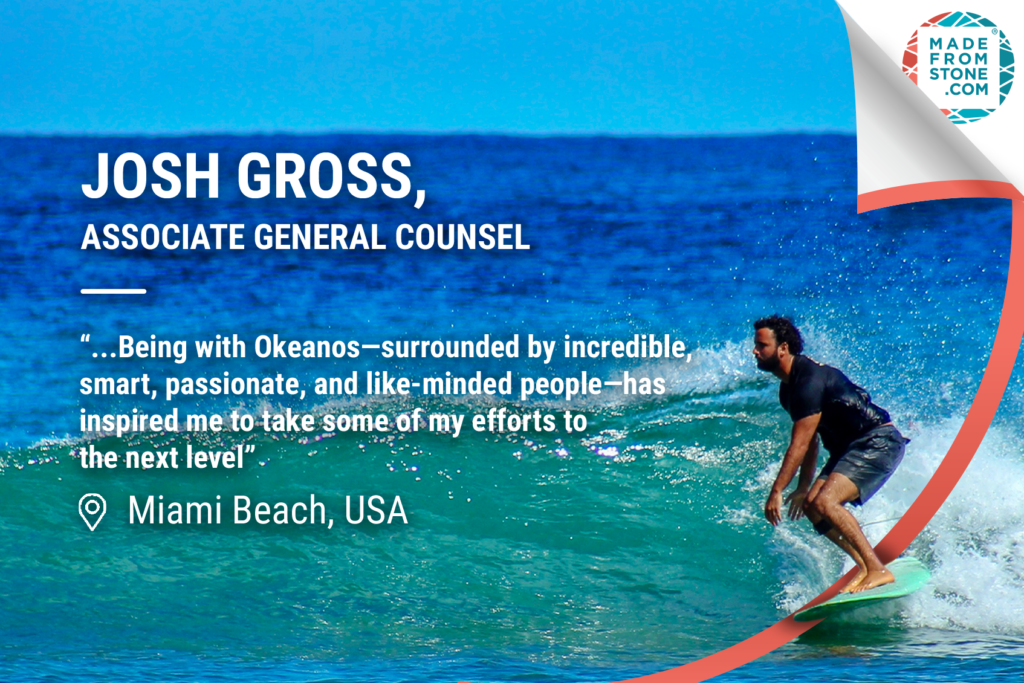 Meet Josh Gross, our Associate General Counsel. Read on to see what motivates Josh, and how the legal community is starting to shine a light on sustainability.

Tell us about your childhood. Did you spend time by the ocean?
I had an idyllic childhood growing up in Miami. The ocean was always readily accessible by beach, boat, or the many waterways (or canals) that meander the various neighborhoods throughout Miami—including mine. As a kid I liked to fish, but oddly enough (now that I am a surfer) I was afraid to go in the ocean. It wasn’t until I got SCUBA certified at around age 15 that I became more comfortable in the water. I think it was the ability to experience the ocean from a completely new perspective that made me feel more secure in my surroundings.

How has working for an environmentally focused company impacted the choices you make in your daily life?
I’ve always tried to live my life in a sustainable fashion, but being with Okeanos—surrounded by incredible, smart, passionate, and like-minded people—has inspired me to take some of my efforts to the next level. One new sustainable initiative I’ve incorporated into my life is that I have significantly cut down the amount of animal protein I am eating. It’s a win-win scenario because it helps our environment and I feel great.

How has the conversation of sustainability transcended the field of law?
Unfortunately, at least in Miami, many law firms are still using archaic practices regarding their everyday activities. In my experience, most law firms are particularly averse to digitizing, work from home, and various other adaptations they can adopt, which would reduce employees’ carbon footprint. On the other hand, there is a growing—albeit, slowly—faction of environmental lawyers throughout the country as society’s environmental issues ramp up over recent years.

If you could pick a body of water anywhere in the world to spend time near, where would it be?
The Indian Ocean, particularly Old Man’s surf break in Canggu, Bali.

What new skill or hobby did you pick up during quarantine?
During quarantine, I began following this Italian Chef, Frank Prisinzano, who began revealing many of his delicious methods (his word for recipes) via Instagram. So, I learned a handful of new Italian recipes. Pasta Limone is probably my favorite—easy, simple, and tasty.

Now that the world is beginning to re-open, what is the thing you’re most looking forward to?
I’m looking forward to more Sunday dinners with my family, including my local cousins, aunt, uncle, and grandmother. At the beginning of the pandemic, we moved our weekly Sunday dinner onto Zoom. For me, dinner with family is exceedingly more enjoyable than a Sunday zoom call with family.

Want to be part of the Okeanos team?
Check out our Careers page! 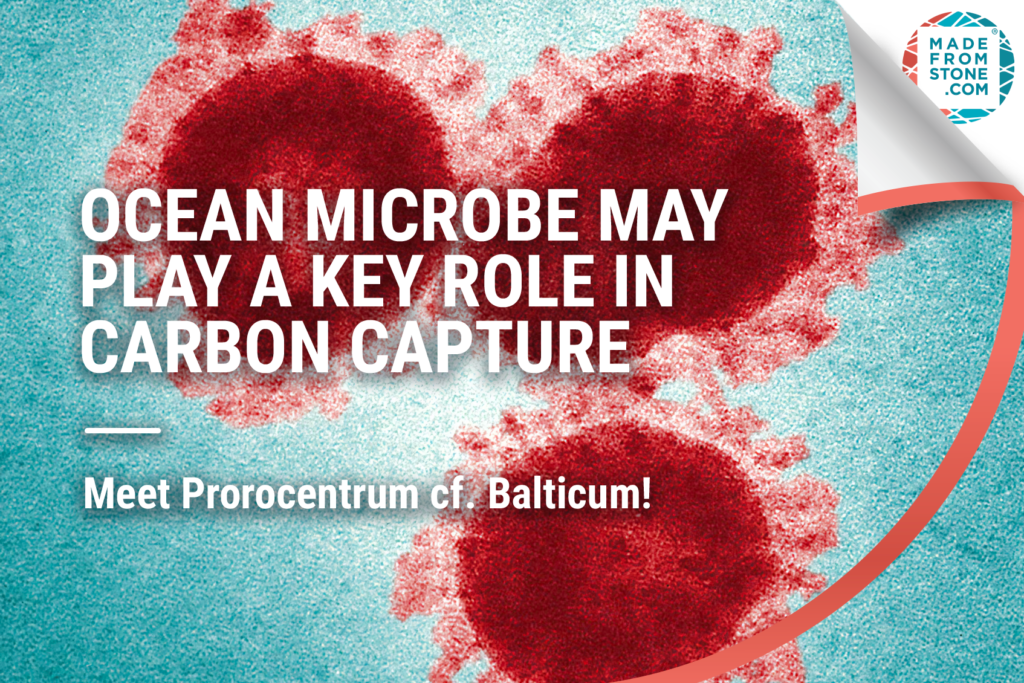 In this section of Set In Stone, we like to highlight the surprising, unique, and unusual phenomena and creatures that make our Okeanos worth preserving. Meet the Prorocentrum cf. Balticum!

Sometimes big things come in small packages! Meet this mighty microbe, first identified in the waters off the coast of Sydney, Australia, believed to be capable of sinking up to 0.15 gigaton of carbon per year!

Prorocentrum cf. Balticum is what’s called a mixotroph, which uses both nutrients from the surrounding seawater, and other microbes to grow, allowing it to survive in parts of the ocean devoid of nutrients. Using photosynthesis, the microbe secretes a carbon-rich mucus that attracts other microbes. The mucus is is then abandoned, sinking the carbon to the bottom of the ocean.

Scientists are optimistic about the potential for the ocean to capture more carbon naturally through reliance on this “a secret weapon in the battle against climate change,” if these mighty microbes can be cultivated specifically for carbon capture.