In honor of the millions of children around the world who are about to return to school this fall, the August issue of Set In Stone is focused on education. We’re looking at what we know for sure about climate change, where and how we get our information, and why we can’t always believe everything we read. 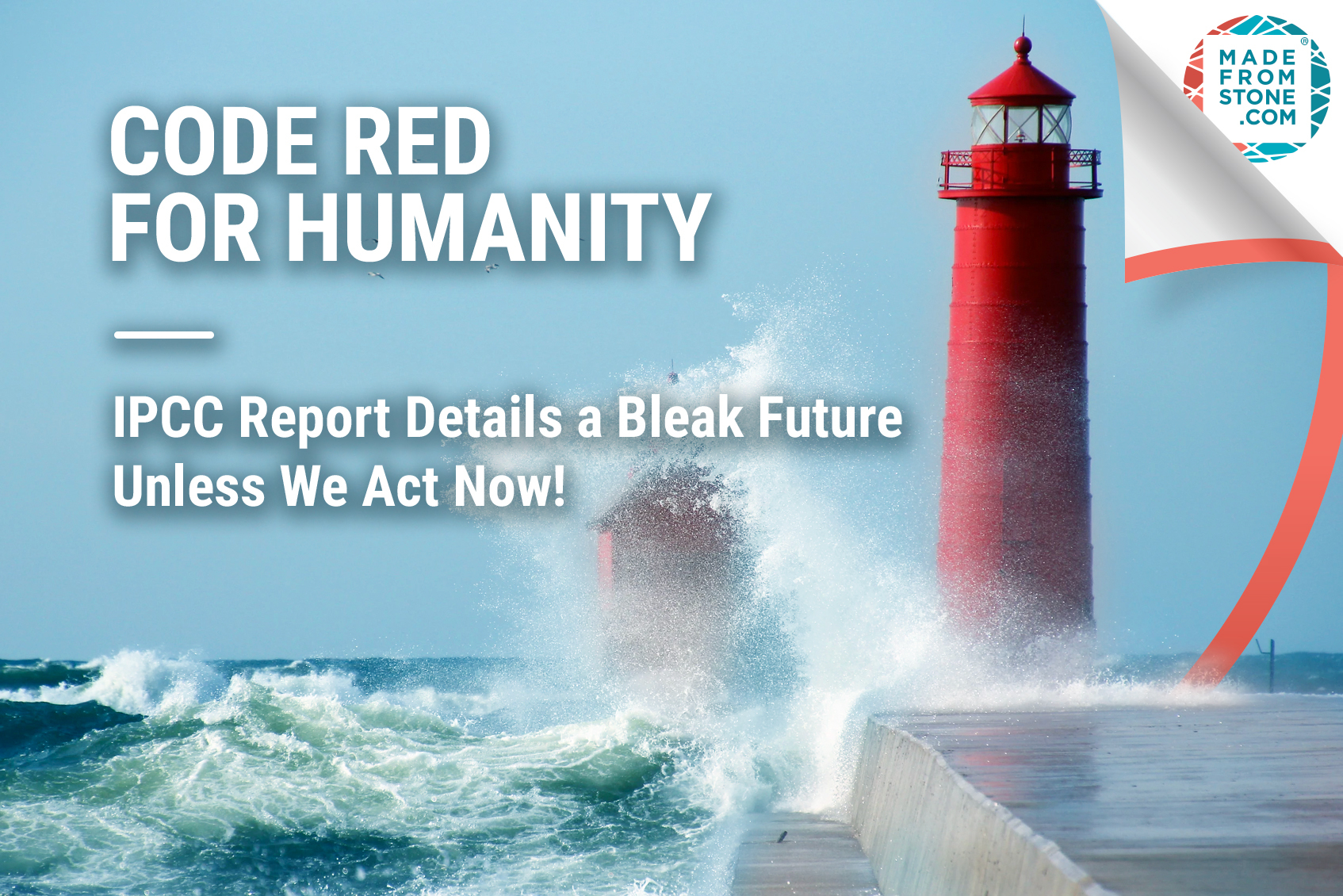 This month, the Intergovernmental Panel on Climate Change (IPCC) released it’s 6th annual report, detailing a year’s worth of climate science.  Thought to be the definitive document on climate change, the report has been agreed to line by line by representatives from 195 countries and will form the basis for a global climate summit this November.

The conclusions reached in the document are bleak – rising temperatures have wreaked havoc on the environment from floods to wildfires to droughts, and nowhere in the world has escaped the effects of climate change.  The world is expected to reach the 1.5C threshold of warming within 20 years, meaning that even with significant emissions cuts, temperatures will continue to rise until at least 2050.  “With every additional increment of global warming, changes in extremes continue to become larger,” warns the report.

The document is designed to paint a picture of what’s happening and what could happen – but not to instruct society on how to act. “Throughout this cycle, we have been telling the world that science has spoken and it’s now up to the policymakers for action,” explains IPCC Chair Hoesung Lee.

As for what we can do, Helen Clarkson, CEO of The Climate Group explains, “every decision, every investment, every target, needs to have the climate at its core.” More specifically, “immediate, rapid and large-scale reductions” in greenhouse gas emissions are necessary. However, not all the news is negative. “Everything we need to avoid the exponential impacts of climate change is doable.” explains former UN Climate Chief Christina Figueres. “But it depends on solutions moving exponentially faster than impacts.”

Immediate, scalable, verifiable solutions are now more important than ever, which is why Okeanos is committed to introducing Made From Stone to the global marketplace.

To read the IPCC report in it’s entirety, click HERE. 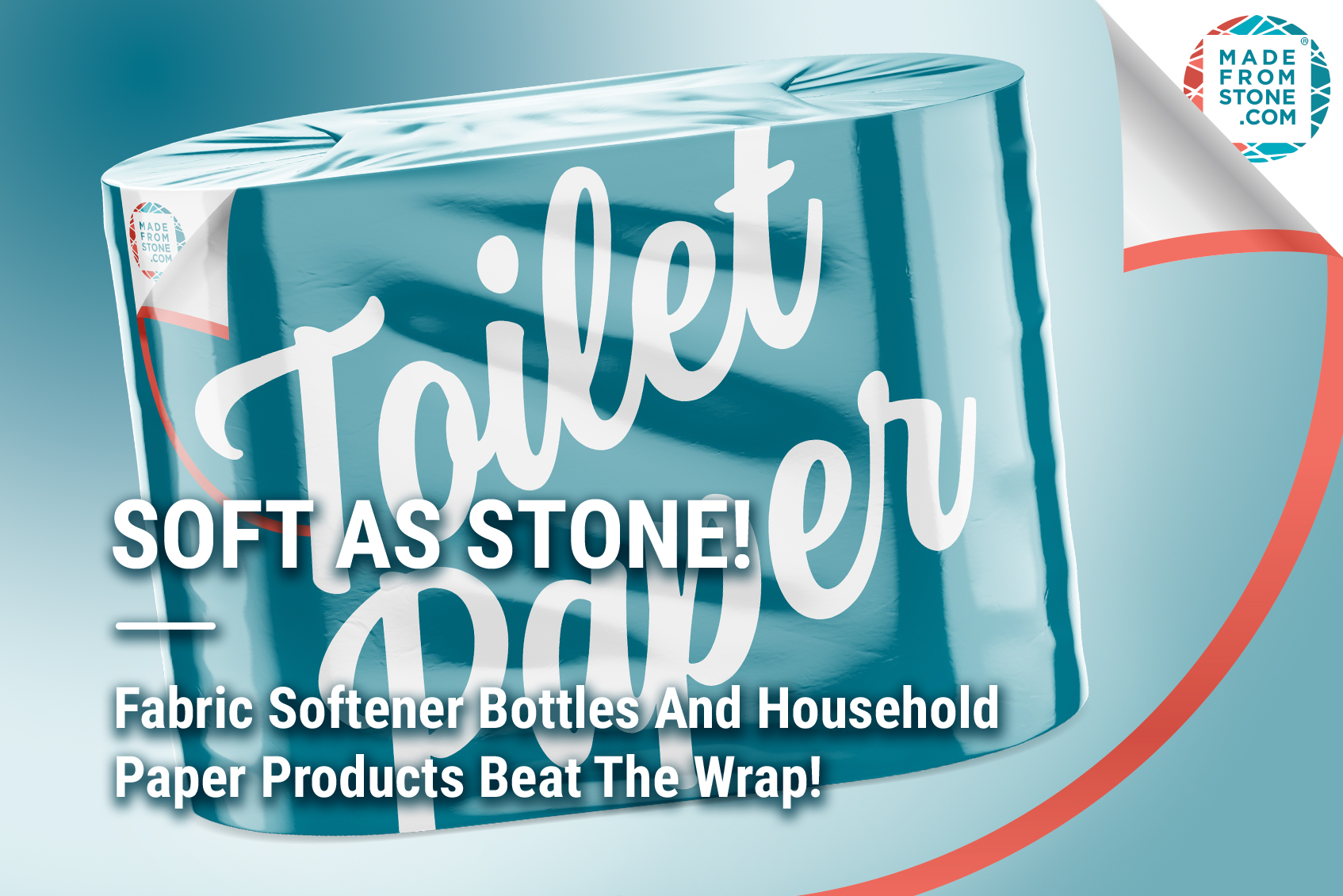 These fabric softener bottles are extrusion blown molded with Made from StoneTM . A mono-polymer that makes a mono layer Made From Stone product, these bottles are lightweight and flexible enough to squeeze! Soon, they’ll be on shelves in Latin America, with less plastic, and a lower carbon footprint than their former selves!

We are also putting our technology to work to replace household essentials and the disposable packaging that wraps our essentials! Did you know that barrier film Made From Stone can keep out humidity and the elements so we can wipe up messes with dry paper towels? Our barrier film is strong enough to hold rice and flour through the rigors of shipping while keeping the ingredients dry.

To learn more about making the switch to stone, contact trade@madefromstone.com 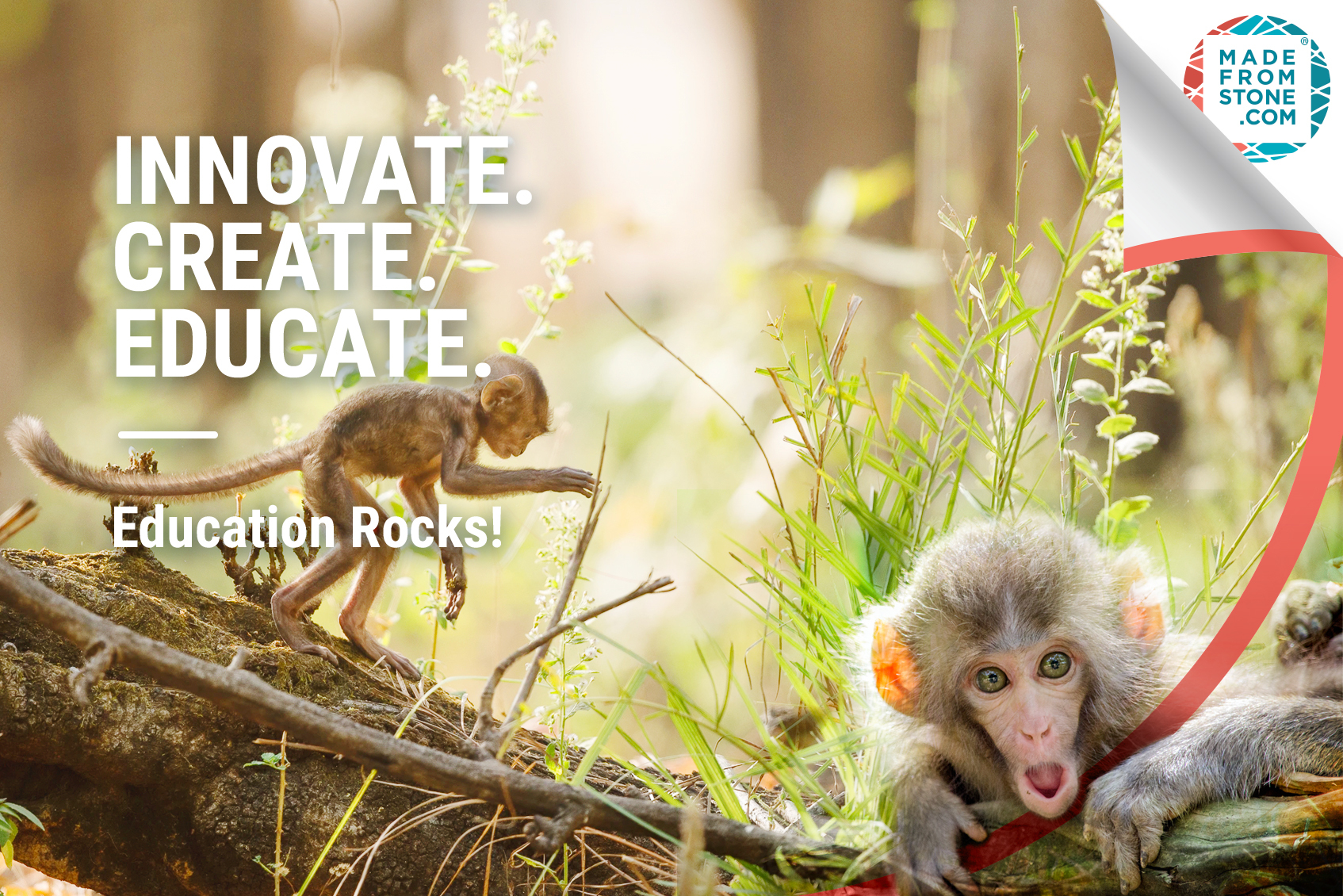 Did you know that over the course of the past several months, the Okeanos team has been working virtually with our Jr. Coral Crew? These are hundreds of students in classrooms around the globe who are curious about environmental education!

We’re equipping the world’s next generation of environmental warriors with the information necessary to develop new strategies to fight climate change, conserve our natural resources, educate their peers and parents, and combat plastic pollution.

To bring an Education Rocks!
Program to a school near you, email coralcrew@madefromstone.com! 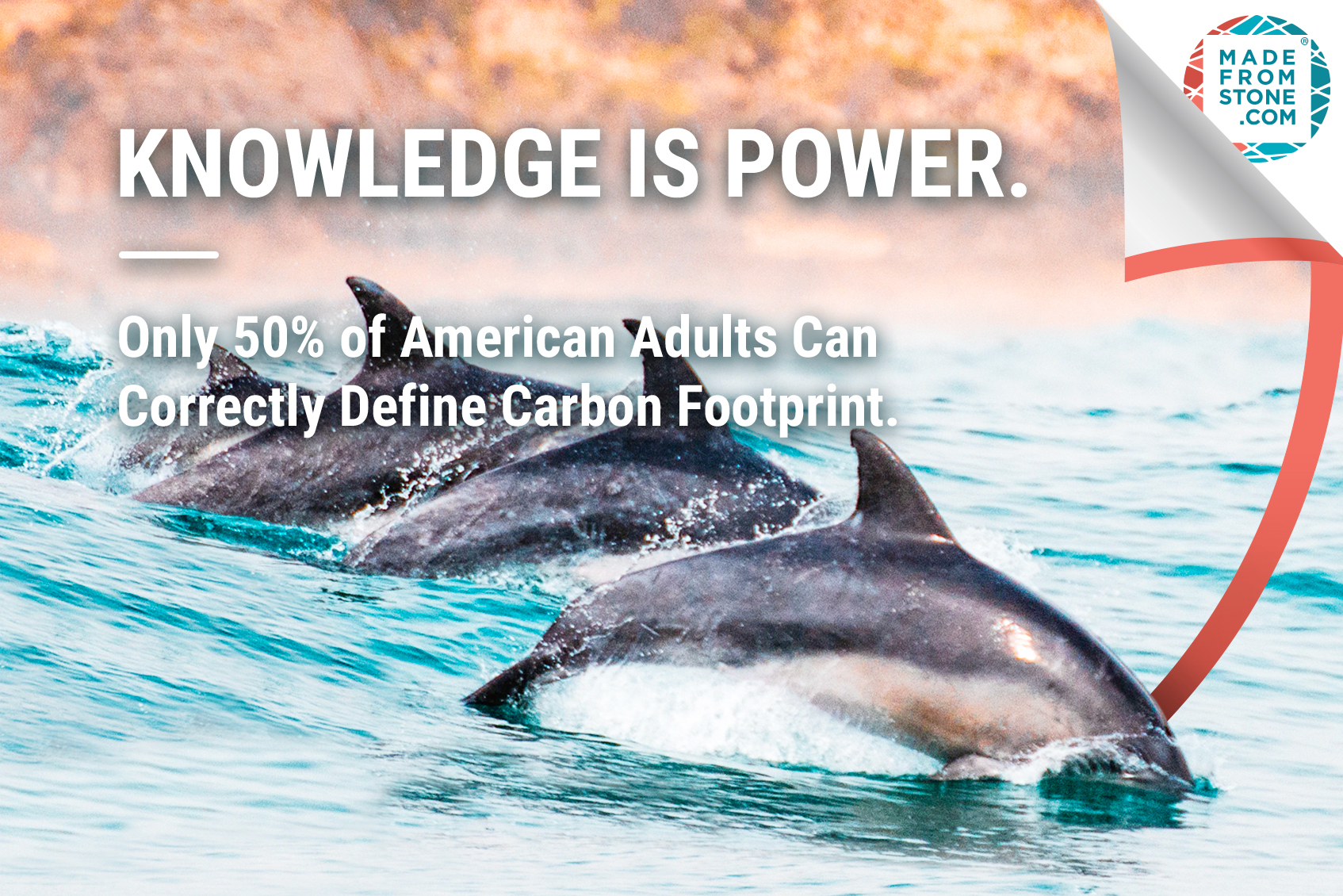 In past editions of this newsletter, we’ve offered up a myriad of different ways to calculate your personal carbon footprint, but it occurred to us recently that we’ve never actually defined the term – and it turns out that we’re not alone!

According to a recent survey by OnePoll, while the majority of Americans agree that reducing our carbon footprint is important, nearly 50% of those surveyed couldn’t define what “carbon footprint” is! So, to help out, we’re going to break it down for you here.

A person’s carbon footprint is the amount of carbon dioxide that is released into the atmosphere as a result of their activities. Collectively, the amount of carbon dioxide and other greenhouse gases we emit through our activities has negative effects on weather, air pollution, animals, and ecosystems. Everything from the food we eat to the cars we drive, to the things we buy has an associated carbon footprint.

In order to reverse the effects of the impact of our carbon emissions, we need to work on reducing our carbon footprint. This is where Okeanos’ signature Made From Stone technology comes in! By making the switch to stone, we can reduce the carbon footprint of the products we use everyday by more than half – not by 2030 or by 2050, goals that some of the world’s largest corporations have set, but now!

To learn more about how Made From Stone can help you reduce your products’ carbon footprint, contact trade@madefromstone.com 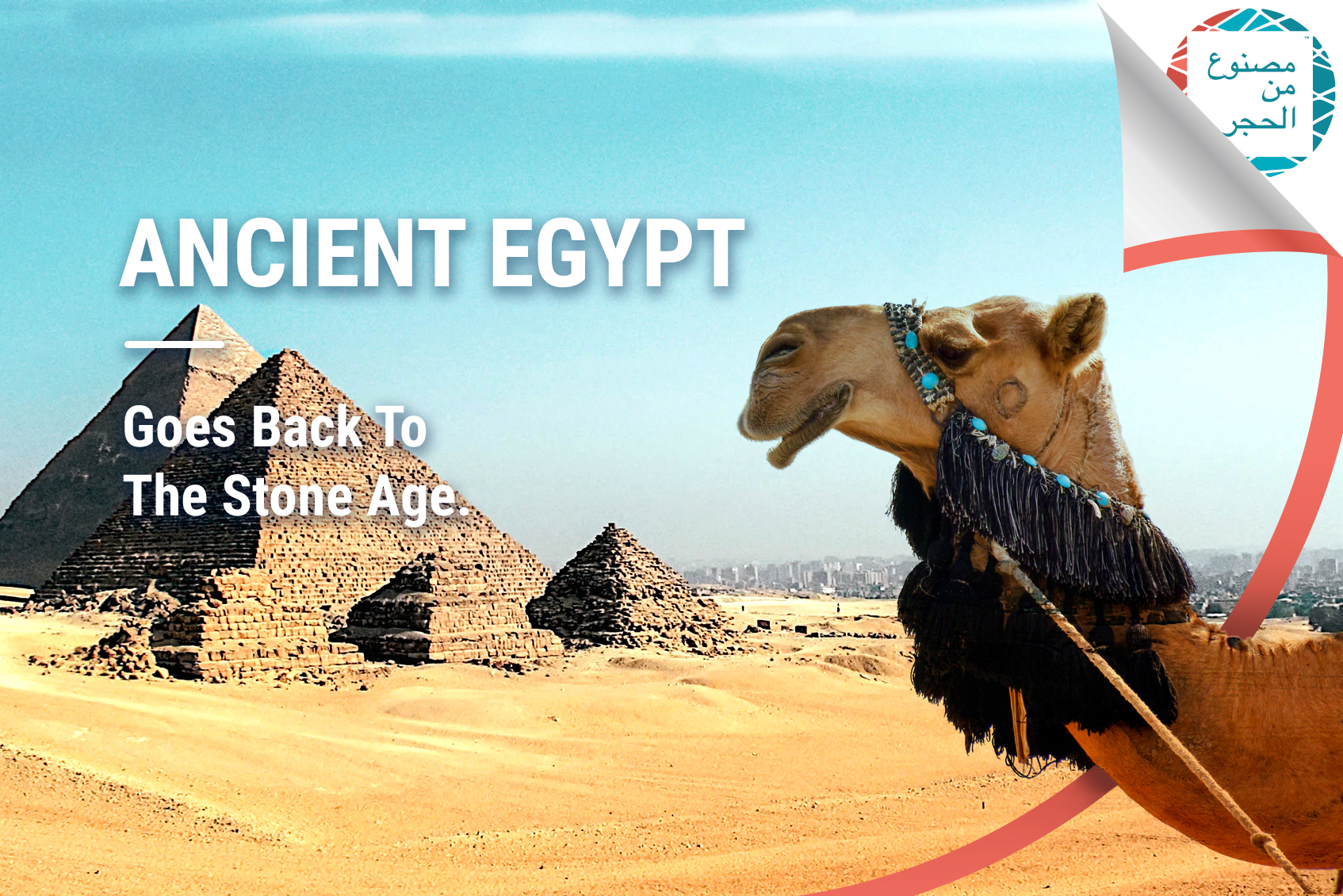 Egypt is known as the mother of the world- birthplace of innovation, politics, religion, and culture. Watch the video to learn about how the new generation of Egyptians are following in the footsteps of their ancestors, and ushering in a new generation of ideas and creative solutions like Made From Stone. 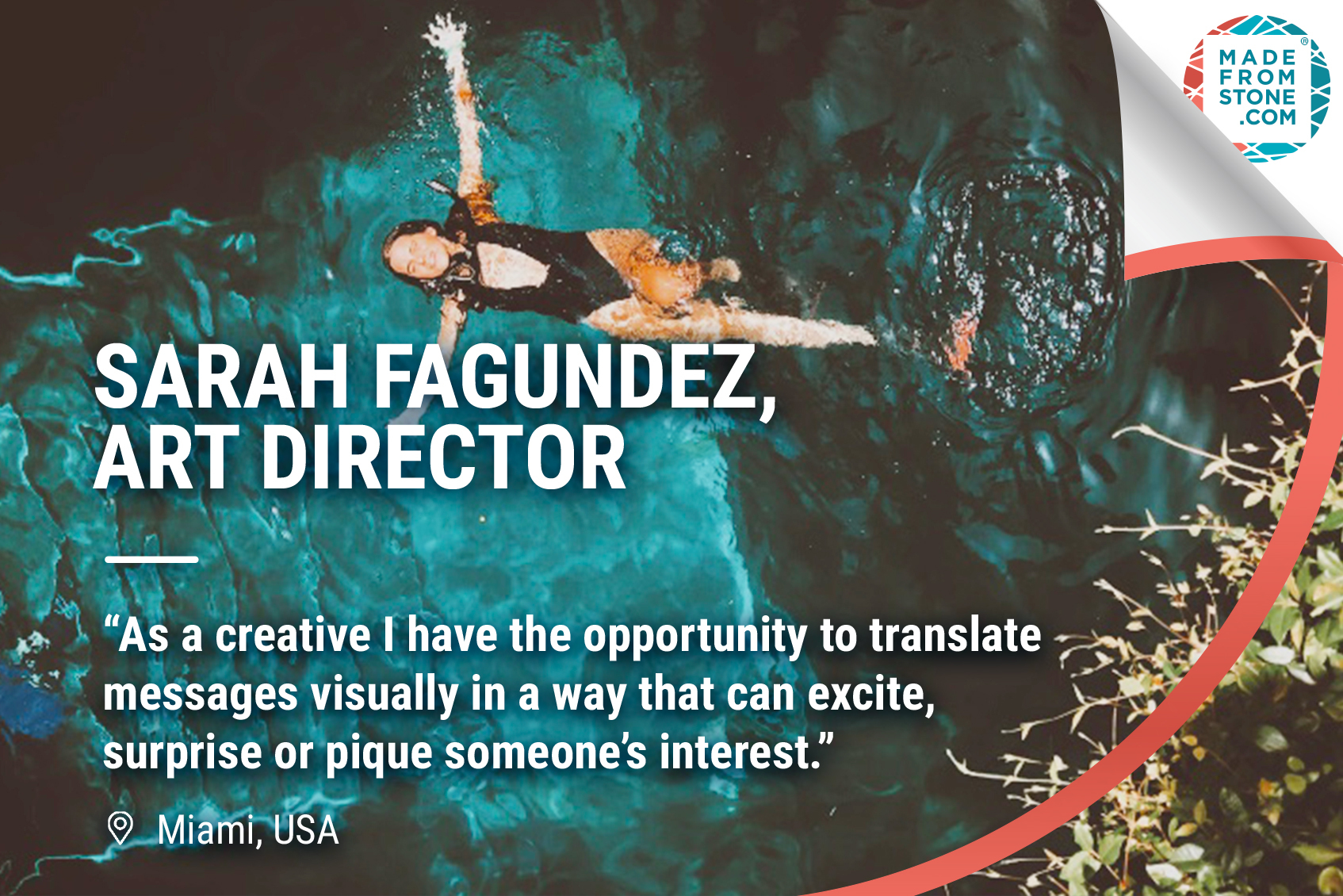 This month’s Rockstar is Miami-based Art Director Sarah Fagundez. Read on to learn more about how Sarah uses her considerable creative skills to further Okeanos’s environmental efforts, and how she reconnected with nature during COVID.

Tell us about your childhood. Did you spend time by the ocean?
Since I can remember, we used to go at least twice a month to my family’s beach house in Morrocoy, Venezuela. I grew up riding our boat until sunset and getting fresh “cocadas” from the locals near the coastline. There is no place where I feel as peaceful and as grounded as the ocean and I always find my way back to it.

Has working for an environmentally focused company impacted the choices you make in your daily life?
In so many ways. Even though I was a little conscious about climate change, I wasn’t as informed and aware as I am now. I’ve had become that friend who’s always asking everyone to re-use their cups, to not use straws, to say no to plastic bags at the grocery store, etc. I’m even more conscious about what I eat and where I shop from. A lot of things have shifted for me in the past year for sure.

What do you see as the role of creatives in helping to raise awareness for social causes?
As a creative I have the opportunity to translate messages visually in a way that can excite, surprise or pique someone’s interest. I can bring new life to social concepts that may sound confusing or dull and use my skills for good

If you could pick a body of water anywhere in the world to spend time near, where would it be?
Definitely, the Caribbean Sea.

What new skill or hobby did you pick up during quarantine?
Although it might sound a bit cliche, I had never exercised as hard as I did during those quarantine months. I finally had the opportunity to give myself some time to meditate and get closer to nature.

Now that the world is preparing to re-open, what is the thing you’re most looking forward to?
I’m looking forward to meeting new places and people. Being able to travel and seeing stuff for the first time again! 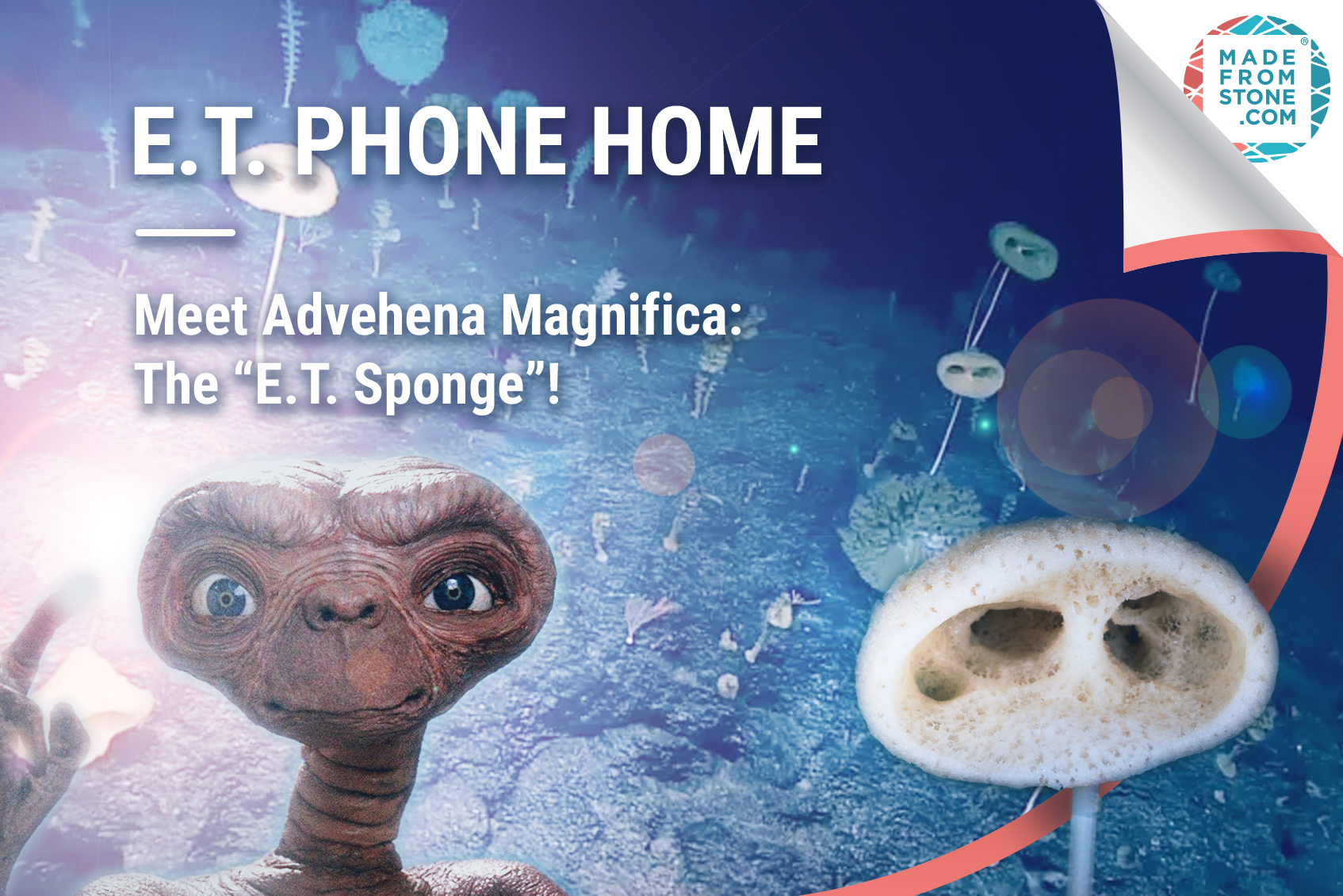 Discovered in the depths of the Pacific Ocean, this glass sponge species has been given the scientific name “Advehena Magnifica” or Magnificent Alien. The moniker was designated due to the two large holes in the sponge’s body, reminiscent of the famed TV alien, E.T.

The sponge, which has been nicknamed the “E.T. Sponge” by researchers, is believed to produce chemical compounds that could help treat human diseases and was seen during several missions in the Pacific on NOAA ship, Okeanos Explorer!