In the February edition of Set in Stone, Okeanos introduces our new partners in the Middle East, rolls out new product capabilities, and keeps our finger on the pulse of the global plastic and carbon footprint conversation. 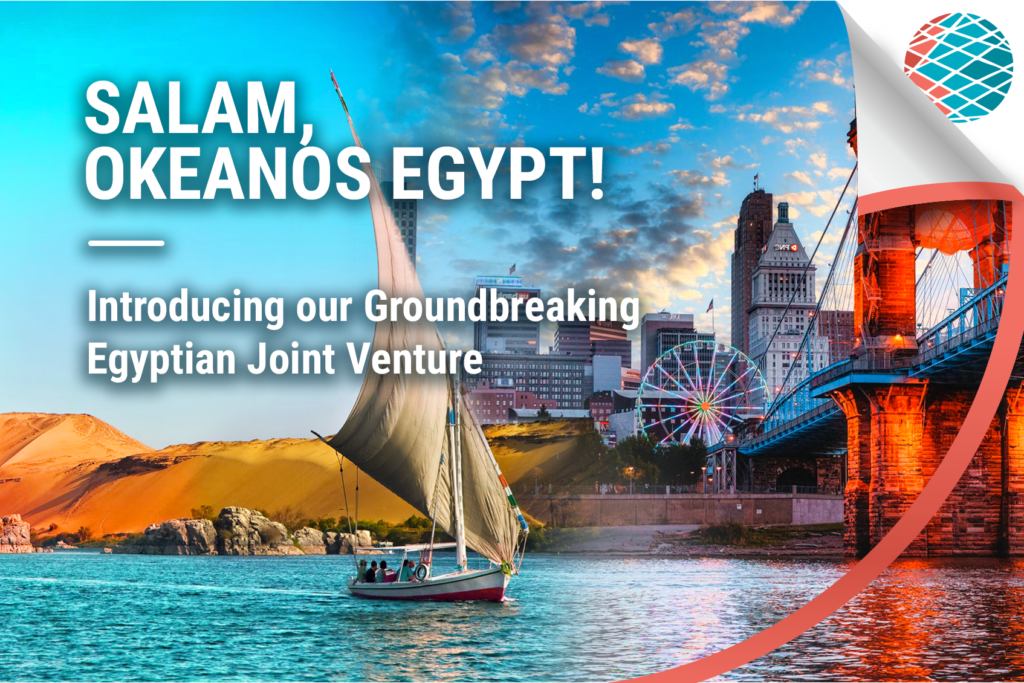 Earlier this month, against the backdrop of the miraculous Pyramids of Giza (which are made from calcium carbonate!), Okeanos CEO Florencio Cuetara and Income International CEO Hesham Sheta sealed the deal on Okeanos Egypt, our newest Joint Venture Partnership!

Okeanos Egypt will serve as a model for other joint venture partnerships around the world, working alongside the Egyptian Government as they prepare to host Conference of the Parties (COP27), the world’s most important environmental conference, this November. Egypt intends to lead by example, introducing proactive environmental initiatives and fostering innovative technical solutions like Made From Stone, to tackle the world’s climate challenges.

Egypt is the top plastic polluter in the region, as well as the biggest source of marine plastic pollution in the Mediterranean. Moreover, the Nile River, which serves as a vital source of food and water for the 11 countries it flows through, carries over 200,000 tonnes of plastic into the Mediterranean Sea each year, according to a report by the IUCN. Unless the issue of plastic is addressed, this number is expected to double by 2040.

In early February, the Okeanos team met with the various Egyptian ministries responsible for orchestrating COP27, including the Egyptian Prime Minister Madbouly, Ministry of Environment, Ministry of Planning, and Ministry of International Cooperation, as well as representatives of the US Government, all of whom expressed support for the project.

Energized by these meetings, Okeanos Egypt is looking ahead to COP27, where intend to have a significant presence and hope to meet representatives from other forward-thinking governments to highlight the Egyptian model. We hope to introduce them to a solution that is Scalable, Timely, Optimizable, Neutrally Priced, & Easily Adoptable. 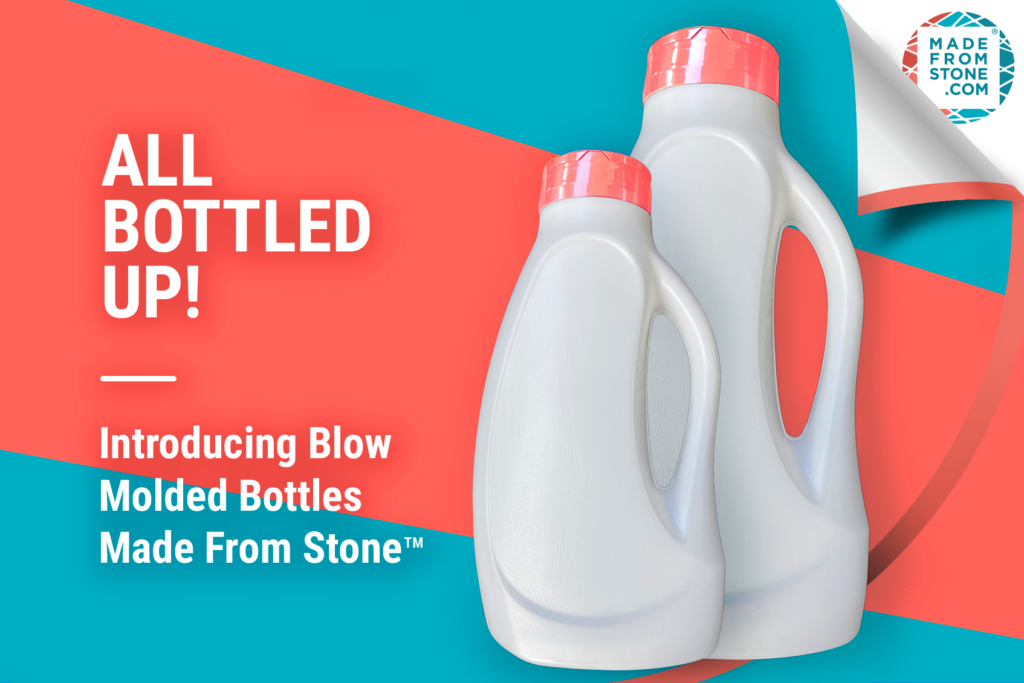 Introducing blow-molded bottles created using Made From Stone technology. These bold, bottled beauties which can be used for everything from shampoo to salt, have excellent technical qualities including a low density, and improved resistance. Most importantly, these bottles boast significantly less plastic, and have a lower carbon footprint than their virgin plastic predecessors.

If you are interested in making your bottles more sustainable using Made From Stone,
please contact trade@madefromstone.com 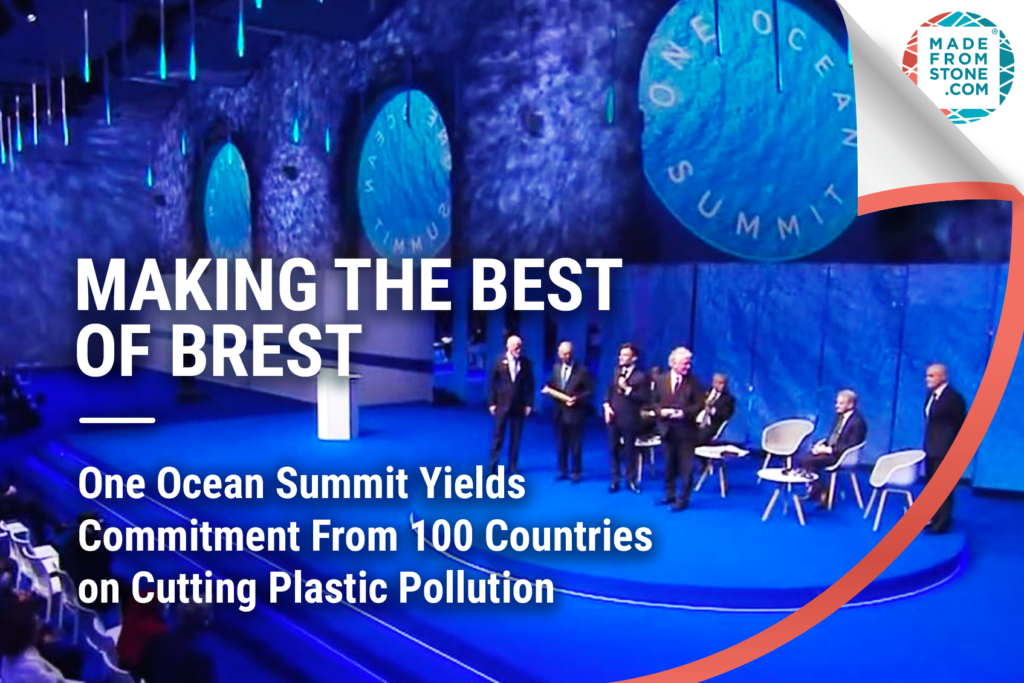 “The ocean and climate are inextricably linked. They’re one and the same,” explained US Climate Envoy, John Kerry at the One Ocean summit that took place in Brest, France in early February. It is because of this vital connection that representatives from more than 100 countries signed a commitment which directly addresses plastic pollution.

The event also yielded commitments on illegal fishing, underwater noise, sustainable use of the “high seas,” reduction of emissions, and the restoration of coastal ecosystems, as well as pledges of €4bn by a collective of European banks by 2025 as part of a clean oceans initiative.

While environmentalists are cautiously optimistic about the commitment, everyone is hoping that the fourth round of UN Negotiations scheduled to take place in New York in March leads to not only commitments, but concrete measures including a structure for governance.

Last month, Okeanos joined 200+ private companies and countries in the call for a “plastics economy global commitment” backed by the UN Environment Program (UNEP) to help governments and businesses transition to a circular economy aimed at recycling or reusing 100% of all plastics.

To read the statement in support of a legally binding
UN Treaty on Plastic Pollution, click here. 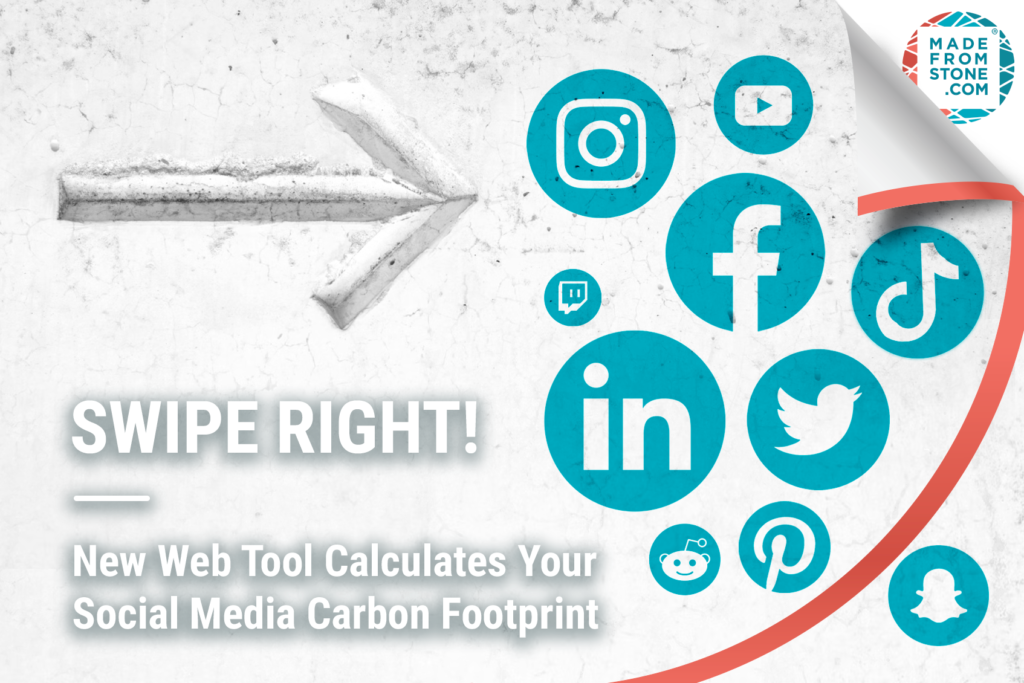 Social media has become a key form of communication for people of all ages, whether it’s your teenage cousin dancing around the living room on TikTok, or your mother is keeping tabs on her grade school friends on Facebook. A flood of studies have dissected social media’s emotional impacts on this current generation, but what about its environmental impacts?

Created by UK based comparison website, Compare The Market, this calculator uses the time each user spends on social media multiplied by the average carbon emissions of each platform as defined by Greenspector, to better understand the carbon emissions tied to each scroll, swipe, and “like.” According to the tool, TikTok has the largest carbon footprint – roughly 2.63 gCO₂Eq (grams of carbon dioxide equivalent) per minute, followed by Reddit (2.48 gCO2 Eq), Pinterest (1.30 gCO₂Eq), Instagram (1.05 gCO₂Eq), and Snapchat (0.87 gCO₂Eq).  For scale, spending 5 minutes on each of the ten main social media platforms every day equates to over 20kg of carbon a year, equal to driving 84.5km (52.5 miles)!

The platforms that boast comparatively smaller carbon footprints per the site include Twitch, Twitter, LinkedIn, and Facebook.

We must remember that even our small collective carbon footprints make a big impact. 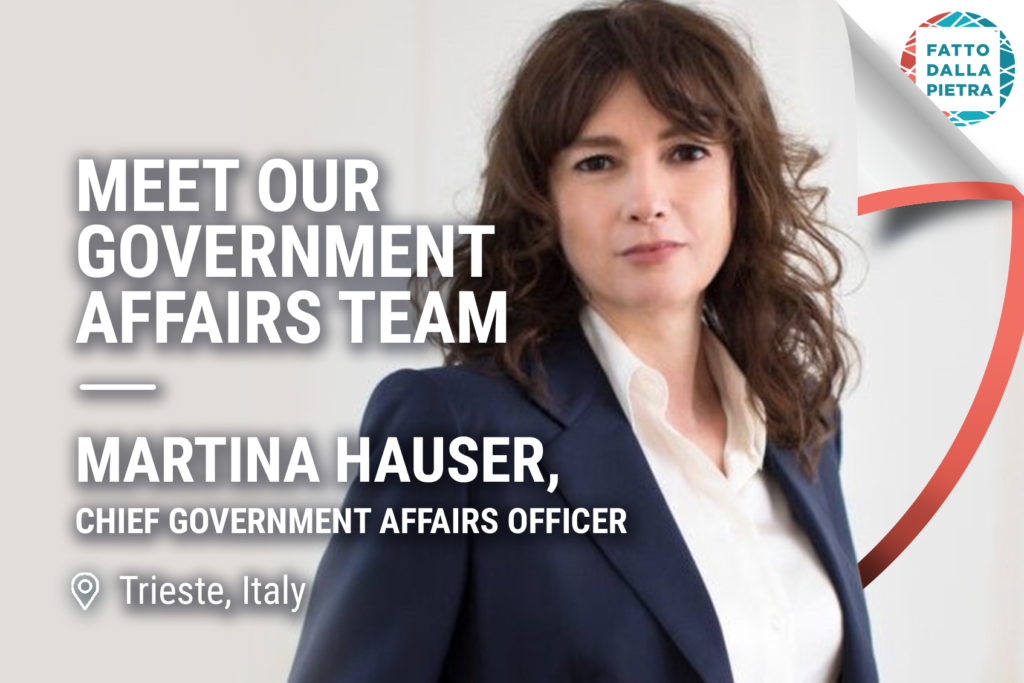 Spearheaded by Martina Hauser, a veteran climate negotiator who represented Italy as lead negotiator at COP, our Government Affairs Team is working to collaborate with governments to develop and enact legislation that drives decarbonization and sheds light on the plastic pollution problem. Her team, including Alessandra Palma and Hetam Shaker, bring a vast portfolio of experience in everything from climate negotiation to regulatory policy. Under their leadership, Okeanos looks ahead to continued intergovernmental cooperation around the world. 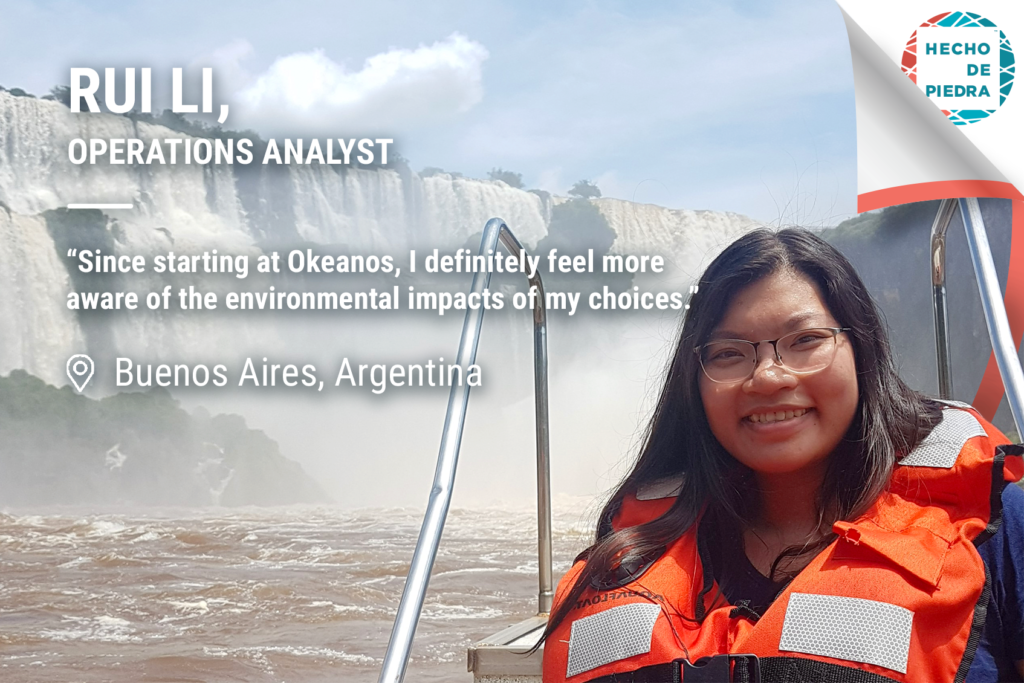 Meet Rui, our amazing Operations Analyst. Rui works to ensure our technology moves effortlessly around the world. Read on to learn more about how she got her start in sustainability, and why she’s not stopping anytime soon!

Tell us about your childhood. Did you spend time by the ocean?

As a child, I spent a lot of time outdoors. I grew up on the island of Jamaica, so my backyard was the ocean, the waterfalls and the mountains. I feel so fortunate that I got to live alongside nature for as far back as I can remember.

How have you noticed the conversation around sustainability change in the past several years in Argentina?

Yes, absolutely. Argentina has enacted new laws and regulations over the past few years to encourage sustainability. There are now more laws in place to encourage residents to reuse, recycle and reduce. Additionally, the government has started to educate citizens on the guidelines for garbage segregation and disposal. I now have more conversations with friends and colleagues concerning sustainable purchases, packaging and energy.

As Covid 19 winds down around the world, have you noticed the beleaguered global logistics system rebounding?

How has working for an environmentally focused company impacted the choices you make in your daily life?

Since starting at Okeanos, I definitely feel more aware of the environmental impacts of my choices and have made some changes to my daily life. For example, I decided to carry around a metal straw and coffee cup when eating out with friends and try to use only reusable grocery bags when shopping. I also started to reduce the times I eat out at fast food restaurants since I notice the amount of single-use waste created. It’s the little things that add up to make a big difference.

If you could pick a body of water anywhere in the world, where would you go?

I would pick the beautiful warm, blue seas of the Caribbean. It is a great place to relax and have fun.

What new skill or hobby did you pick up during quarantine?

Whenever I would get bored during the quarantine I would practice singing and dancing. I used to be in a choir in high school, so practicing brings back fond memories.

Now that the world is beginning to re-open, what is the thing you’re most looking forward to?

Right now, I live very far away from my family. It has been 3 years since we were last together. Reuniting with them is one of the things I look forward to the most. 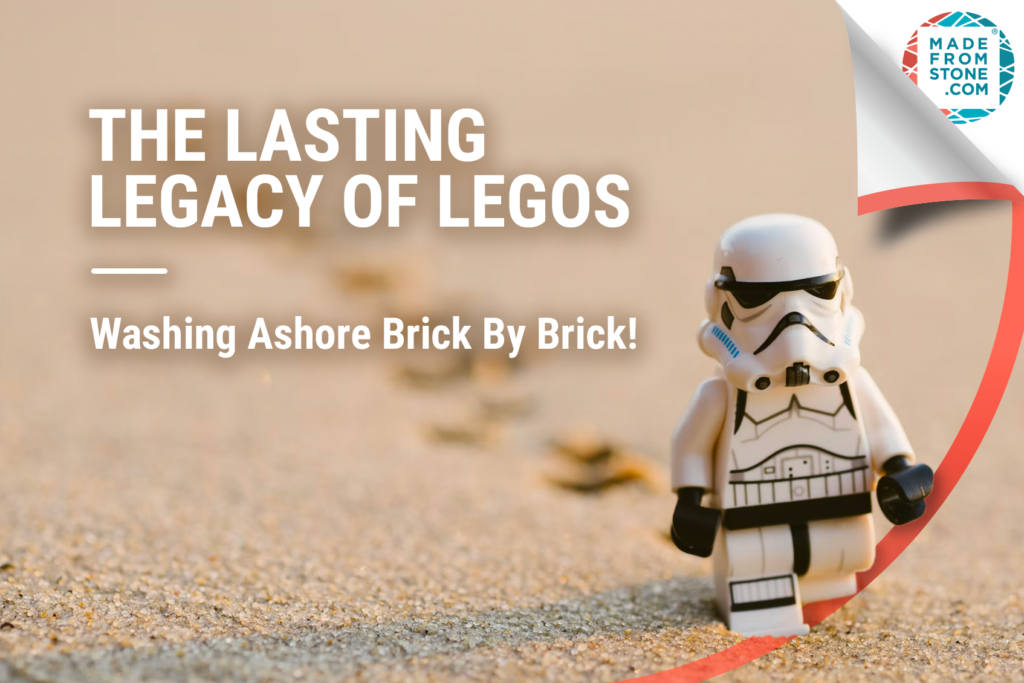 In this section of Set In Stone, we like to highlight the surprising, unique, and unusual phenomena and creatures that make our Okeanos worth preserving.

England’s beaches are awash in plastic, but it’s not bottles or cigarette filters…but tiny pairs of flippers and miniatures sea creatures. This plethora of tiny plastic pieces can actually be traced back to a shipwreck 25 years ago!

In 1997, the Tokio Express, a cargo ship en-route from the Netherlands to New York carrying 62 shipping containers, was overtaken by a large wave, dumping its contents into the ocean. 25 years later, cargo from one of the containers, ironically carrying five million sea-creature themed Legos, is still washing up on beaches in Cornwall, England. Dubbed “The Great Lego Spill,” the greatest toy-related environmental disaster has also become an unintended scientific tool.

“What we’re finding now are the pieces that sank as well as the pieces that floated,” Williams told scientific journal, Live Science. “It’s providing us with an insight into what happens to plastic in the ocean, how far it drifts — both on the surface of the ocean but also along the seabed — and what happens to it as it breaks down,” explains environmentalist and Cornwall resident, Tracey Williams, who has been documenting the pieces she found on social media, and in a book which was recently published.

Scientists from Environmental Pollution, who analyzed pieces recovered from the spill, estimate that it will take about 1,300 years for the Legos to degrade fully. This is a perfect example of why Okeanos’ Made From Stone technology is essential. Creating better products will have consequences for years to come.

To learn more about what else can be Made From Stone,
contact our team at Trade@madefromstone.com